Flags of the World Series: Kenya 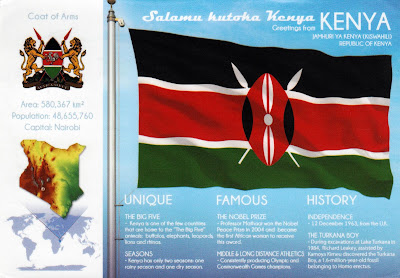 Kenya is a country in Africa and a founding member of the East African Community. Its capital and largest city is Nairobi. Kenya's territory lies on the equator and overlies the East African Rift covering a diverse and expansive terrain that extends roughly from Lake Victoria to Lake Turkana and further south-east to the Indian Ocean. It is bordered by Tanzania to the south and southwest, Uganda to the west, South Sudan to the north-west, Ethiopia to the north and Somalia to the north-east. Kenya covers 581,309 km2, and had a population of approximately 48 million people in January 2017. 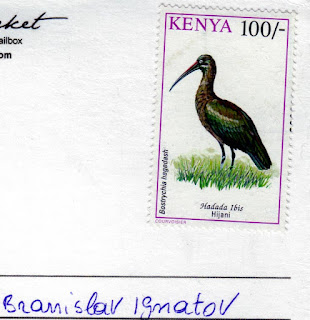 Beautiful stamp on postcard, but unfortunately, without cancellation. This bird on stamp is Hadada Ibis, and release date is 22.02.1993.

Posted by Branislav Ignjatov at 19:13