Dahlias on cover from Canada 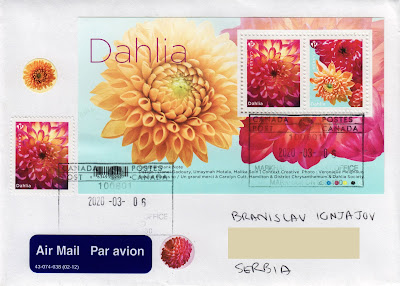 Dahlias are part of the Asteraceae family, which includes sunflowers, daisies, chrysanthemums and zinnias. Single or double flowering, dahlias come in a rainbow of colours (except blue). Considered an annual in Canada, these robust plants will bloom in most parts of the country from mid-summer until the first frost. In the Victorian era, dahlias were exchanged by couples as a show of commitment. They are still widely used in weddings and are said to symbolize honesty, balance, inner strength, creativity, positive change and kindness. More recently, the dahlia has become symbol of diversity, given the seamless way each petal fits into the whole flower head. The stamp was designed by Lionel Gadoury, Umaymah Motala and Malika Soin of Context Creative, with photography by Veronique Meignaud.
Thank you, Kenneth!

Posted by Branislav Ignjatov at 19:39 No comments: 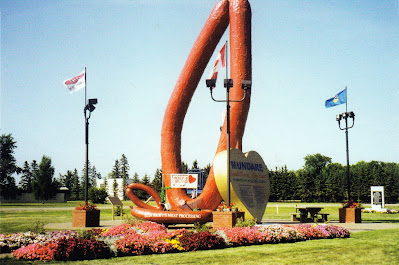 Here's interesting postcard with giant sausage replica from Mundare, Canada. Mundare is a small town in central Alberta. The Canadian National Railway tracks run through the town. Mundare was named after William Mundare, a railway station agent. It is also home of the world's largest garlic sausage (on postcard), which cost about $120,000 to build and erect. 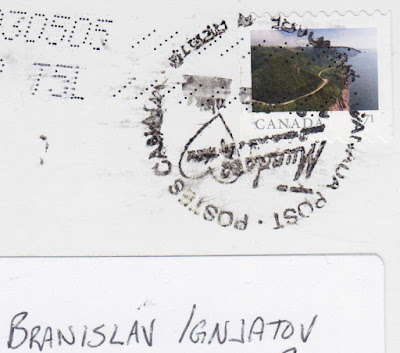 Mundare have interesting postmark, but this one is little bit smudged and upside down, probably during machine cancelling.
Thank you, Trevor!


Posted by Branislav Ignjatov at 23:54 No comments: 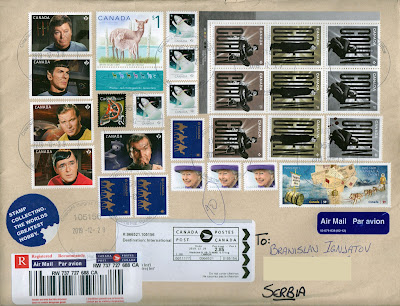 Born in 1934, Cohen was an award-winning poet during his days at McGill University. More poetry and two novels followed after he graduated, including Beautiful Losers in 1966. The following year, Cohen launched a new career in music with an appearance at the Newport Folk Festival and the release of his debut album, Songs of Leonard Cohen. In 1984, Cohen released the album Various Positions. It features “Hallelujah,” his most popular and most covered song. A member of the Canadian Music Hall of Fame, the Rock & Roll Hall of Fame and the Songwriters Hall of Fame, Cohen has also been honoured with multiple JUNO awards and a Grammy Lifetime Achievement Award. Canada Post decided to issue set of stamps in his honor on 21.9.2019. There is also many other stamps, including five Star Trek stamps, English queen, Christmas stamps, white tailed deer, set Mail delivery...

Thank you so much, Trevor!


Posted by Branislav Ignjatov at 01:30 No comments: 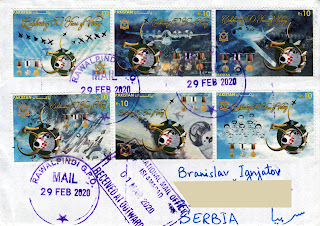 I received cover sent on Leap day from Pakistan with stamp set dedicated to Defence Day golden jubilee celebrations, day when country pays tribute to all those who laid down their lives and lost loved ones in the 1965 and 1971 wars and in the ongoing war against terrorism.There's few nice cancellations on this cover, round one from Rawalpindi post office and square cancellation from International mail office in Islamabad. This beautiful stamps set is issued on 7.9.2015.
Thank you, Faisal!

Posted by Branislav Ignjatov at 02:31 No comments:

Leap year on cover from Canada 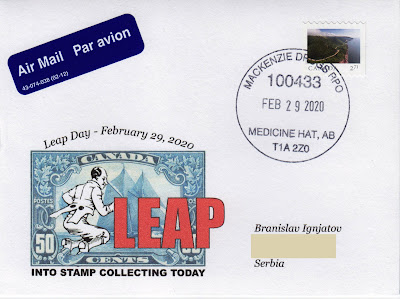 On February 29th 2020 many cover collectors celebrated this event by sending out many covers on exact day, by some of them did more and designed commemorative covers, like this one, designed ans sent by my friend Trevor Ashman. A leap year is a calendar year that contains an additional day added to keep the calendar year synchronized with the astronomical year or seasonal year. Because astronomical events and seasons do not repeat in a whole number of days, calendars that have the same number of days in each year drift over time with respect to the event that the year is supposed to track. By inserting an additional day or month into the year, the drift can be corrected.
Thank you, Trevor!

Posted by Branislav Ignjatov at 19:50 No comments:

Winnie-the-Pooh is a 1969 Soviet animated film trilogy by Soyuzmultfilm directed by Fyodor Khitruk. The film is based on chapter one in the book series by A. A. Milne. Khitruk studied the original book by Milne first in English and only later in Russian, translated by Boris Zakhoder who became a co-writer of the first two parts of the trilogy. Khitruk had not seen the Disney adaptations while working on his own. He created the prototype drawings of the characters together with Vladimir Zuikov. 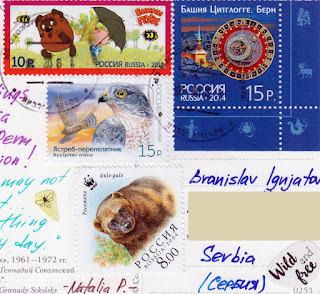 There's four beautiful stamps on this postcard, but most important for me is matching Winnie-the-Pooh stamp, from set Characters of Domestic Cartoons, issued on 3.12.2012.
Thank you so much, Natalia!

Posted by Branislav Ignjatov at 23:46 No comments: 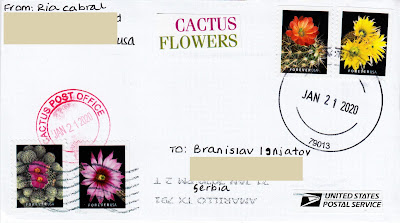 Last year USPS issued set of ten stamps dedicated to cactus flowers. Cactus flowers generally occur singly, although many separate blossoms might appear on a plant at the same time. Flowering occurs at different times of the year and even different times of the day or night. Most cactus flowers are large and flamboyant, with colors of white, red, pink, orange or yellow. This cover is sent from small American city Cactus in Texas, nice matching with stamps!
Thank you, Ria!

Posted by Branislav Ignjatov at 03:14 No comments:

Posted by Branislav Ignjatov at 23:54 No comments:

Ferari's World title in year 2000 on cover from Modena! 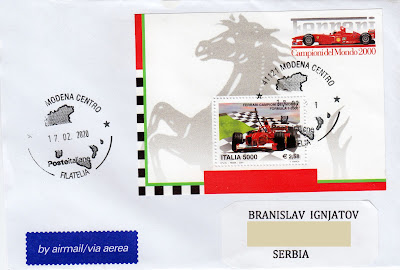 The 2000 FIA Formula One World Championship was the 54th season of FIA Formula One motor racing. Michael Schumacher became Ferrari's first World Drivers' Champion for 21 years having clinched the Drivers' title at the penultimate race of the season. Ferrari successfully defended its Constructors' title. 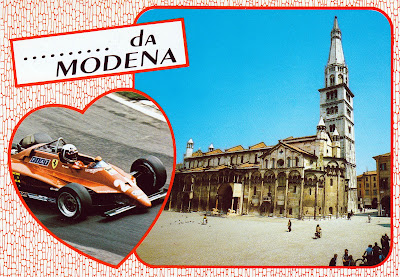 Inside cover was this beautiful old postcard from Modena  Modena is, along with Turin, one of Italy's main centers of the automotive industry, with a rich history and tradition in this field. The iconic Ferrari brand was founded in Modena by Modenese legendary car tycoon Enzo Ferrari, and today is headquartered just outside the city, in the suburb of Maranello. Several other Italian luxury automobile manufacturers such as Pagani, Lamborghini, and Maserati are headquartered in the Modena area. 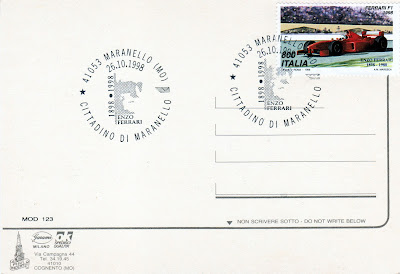 On this stamp you can see winning car Ferrari F1-2000. The chassis was designed by Rory Byrne, Aldo Costa and Nikolas Tombazis with Ross Brawn playing a vital role in leading the production of the car as the team's Technical Director and Paolo Martinelli leading the engine design. The car was a direct development of the F300 and F399 from the previous two seasons, using the same basic gearbox and a new engine with a wider V-angle (90 degrees vs. 75 degrees in the 048 engine); this new wider angle improved and lowered the centre of gravity of the car. It also featured improved aerodynamics over the F399 most noticeably a flatter underside of the nose area, which put it on par with that year's McLaren MP4/15.
Thank you so much, Gabriele!

Posted by Branislav Ignjatov at 22:58 No comments: 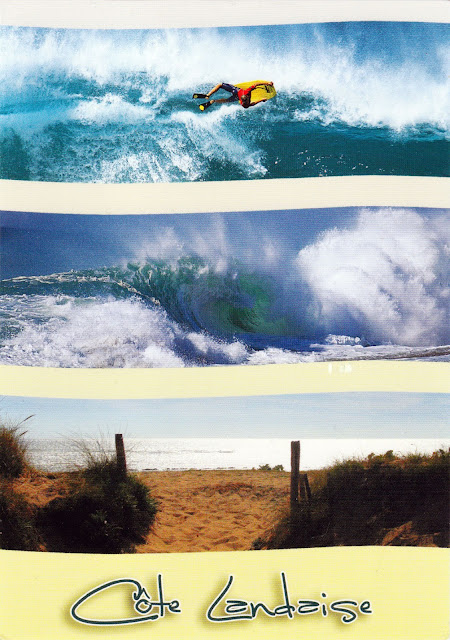 Côte des Landes or Côte landaise is a touristic name given to a section of the French seashore.
In the southwest of France along the Atlantic Ocean, "la Côte des Landes" begins in the north at Arcachon Bay and continues south to the mouth of the Adour River. The area is famous for surfing and beach acivities. 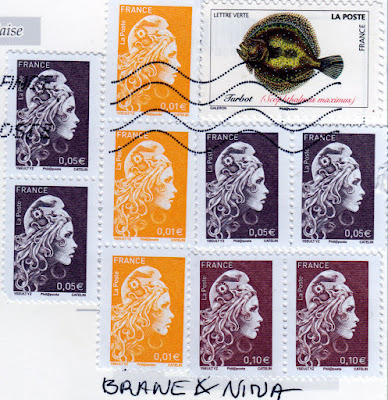 A lot of nice stamps on postcard, but postcard is cancelled by machine, and I'm not big fan of this.

Posted by Branislav Ignjatov at 21:10 No comments: