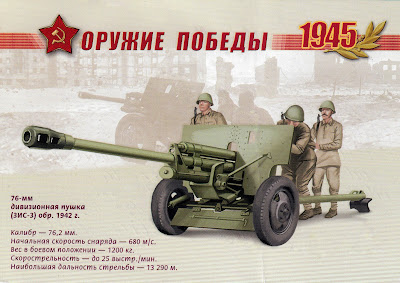 I've received another postcard from Weapons of Victory series of postcards, maxi cards, FDC's and stamps. This is ZiS-3, the 76-mm divisional gun M1942. This was a Soviet 76.2 mm divisional field gun used during World War II. ZiS was a factory designation and stood for Zavod imeni Stalina ("factory named after Stalin"), the honorific title of Artillery Factory No. 92, which first constructed this gun.

Soviet soldiers liked the ZiS-3 for its extreme reliability, durability, and accuracy. The gun was easy to maintain and use by novice crews. The light carriage allowed the ZiS-3 to be towed by trucks, heavy jeeps or even hauled by the crew.

ZiS-3 had good anti-armour capabilities. Its armour-piercing round could knock out any German light and medium tank. The frontal armour of later tanks, like the Tiger I and later the Panther, were immune to the ZiS-3. 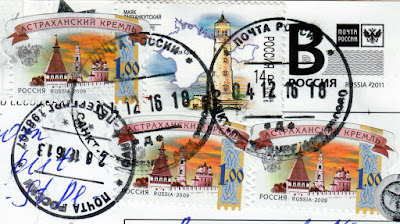 Posted by Branislav Ignjatov at 20:54