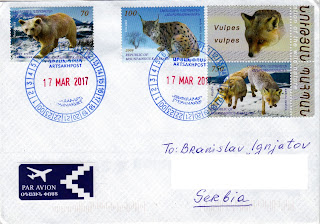 My second cover from Nagorno-Karabakh is Mammals 2009. This stamps set is issued on 10.09.2009.Animals on stamps are Caucasian Brown Bear, Eurasian Lynxand Red Fox.

Caucasian Brown Bear (Ursus arctos caucasicus) is a large bear with the widest distribution of any living ursid. The species is distributed across much of northern Eurasia and North America. It is one of the two largest terrestrial carnivorans alive today, rivaled in body size only by its close cousin, the polar bear, which is much less variable in size and averages larger due to this.

Eurasian Lynx (Lynx lynx) is a medium-sized cat native to Siberia, Central, East, and Southern Asia, North, Central and Eastern Europe. It has been listed as Least Concern on the IUCN Red List since 2008 as it is widely distributed, and most populations are considered stable. Eurasian lynx have been re-introduced to several forested mountainous areas in Central and Southeastern Europe; these re-introduced subpopulations are small, less than 200 animals.

Red Fox (Vulpes vulpes), largest of the true foxes, has the greatest geographic range of all members of the Carnivora order, being present across the entire Northern Hemisphere from the Arctic Circle to North Africa, North America and Eurasia. It is listed as least concern by the IUCN. Its range has increased alongside human expansion, having been introduced to Australia, where it is considered harmful to native mammals and bird populations. Due to its presence in Australia, it is included among the list of the "world's 100 worst invasive species".

Posted by Branislav Ignjatov at 17:26