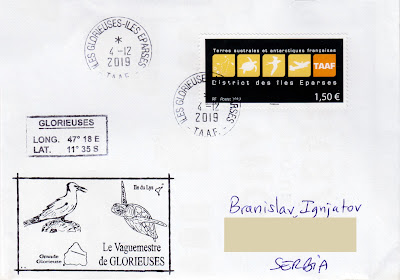 The Scattered Islands in the Indian Ocean consist of four small coral islands, an atoll, and a reef in the Indian Ocean, and have constituted the 5th district of the French Southern and Antarctic Lands (TAAF) since February 2007, though sovereignty over some or all of the Islands is contested by Madagascar, Mauritius, and the Comoros. None of the islands has ever had a permanent population.

This cover was sent from Glorioso Islands. It's a group of French islands and rocks totaling 5 square kilometers. The archipelago consists of two islands, Grande Glorieuse and Île du Lys, as well as eight rock islets. They form part of a coral reef and lagoon, and they have an Exclusive Economic Zone of 48,350 square kilometers.The islands are today nature reserves with a meteorological station garrisoned by The French Foreign Legion.

Posted by Branislav Ignjatov at 02:23