I have received cover from Estonia with two maxicards, one from Soviet Union, and second from North Korea. 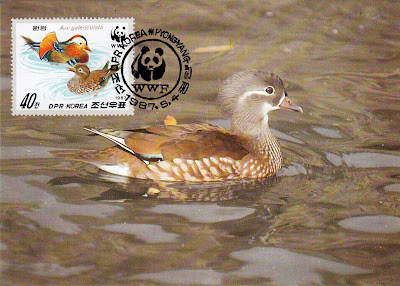 First maxicard is from North Korea, from set of four: World Nature Conservation - Mandarin Ducks (Aix galericulata), issued on 04.08.1987. The mandarin duck is a perching duck species found in East Asia and is native to Japan. It is medium-sized, at 41–49 cm long with a 65–75 cm wingspan. For Koreans, mandarin ducks represent peace, fidelity, and plentiful offspring. Similar to the Chinese, they believe that these ducks mate for life. For these reasons, pairs of mandarin ducks called wedding ducks are often given as wedding gifts and play a significant role in Korean marriage. 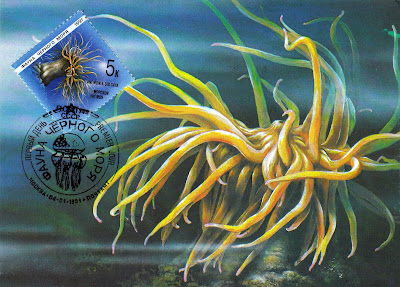 Second maxicard is one of the last issued by Soviet Union. This is Snakelocks Anemone (Anemonia sulcata), from set of five stamps Fauna of Black Sea, issued on 04.01.1991. The snakelocks anemone  is a sea anemone found in the eastern Atlantic Ocean to the Mediterranean Sea. The tentacles of anemones in deep or murky water can be a grey colour, but are otherwise usually a deep green colour with purple tips due to the presence of symbiotic algae within the tentacles that use sunlight as an energy source. As a result, the anemones prefer brightly lit shallow waters. On average the snakelock anemone is 8 cm wide.


Posted by Branislav Ignjatov at 02:24