Postojna Cave is a 24,120 m long karst cave system near Postojna, southwestern Slovenia. The caves were created by the Pivka River. In 1872, cave rails were laid along with first cave train for tourists. At first, these were pushed along by the guides themselves, later at the beginning of the 20th century a gas locomotive was introduced. After 1945, the gas locomotive was replaced by an electric one. You can see train on this postcard. About 5.3 kilometres of the cave system are open to the public. The caves are also home to the endemic olm, the largest trogloditic amphibian in the world, and you can see it on the stamp bellow. 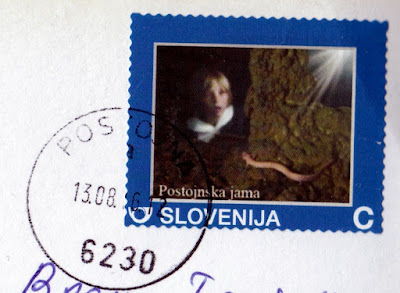 What a nice matching stamp! But this is personalized postage stamp, and i can't find issued date anywhere.

Posted by Branislav Ignjatov at 21:19