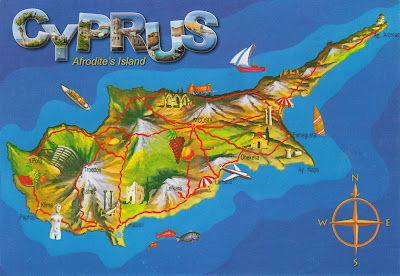 My first postcard from Cyprus is this beautiful map. Cyprus is an island country in the Eastern Mediterranean and the third largest and third most populous island in the Mediterranean. It is located south of Turkey, west of Syria and Lebanon, northwest of Israel and Palestine, north of Egypt, and southeast of Greece.

On 15 July 1974, a coup d'état was staged by Greek Cypriot nationalists and elements of the Greek military junta in an attempt at enosis, the incorporation of Cyprus into Greece. This action precipitated the Turkish invasion of Cyprus, which led to the capture of the present-day territory of Northern Cyprus the following month, after a ceasefire collapsed, and the displacement of over 150,000 Greek Cypriots and 50,000 Turkish Cypriots. A separate Turkish Cypriot state in the north was established by unilateral declaration in 1983; the move was widely condemned by the international community, with Turkey alone recognizing the new state. Northern Cyprus has it's own postal system, and that's why i need to find somebody from Northern Cyprus for my collection ;)

Posted by Branislav Ignjatov at 21:42