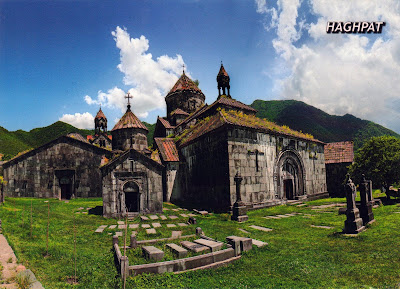 Haghpat Monastery is a medieval monastery complex in Haghpat, Armenia. The monastery was founded by Queen Khosrovanuysh, wife of the Bagratid king Ashot III, probably in 976. The largest church in the complex, the Cathedral of Surb Nishan, probably begun in 976, was completed in 991 by king Smbat. A fresco in the apse depicts Christ Pantocrator. Its donor, the Armenian Prince Khutulukhaga, is depicted in the south transept. The sons of the church's founder, Princes Smbat and Kurike, are shown with Queen Khosravanuysh in a bas-relief on the east gable. Apart from one or two minor restorations carried out in the eleventh and twelfth centuries, the church has retained its original character. The monastery at Haghpat is chosen as UNESCO World Heritage Site. 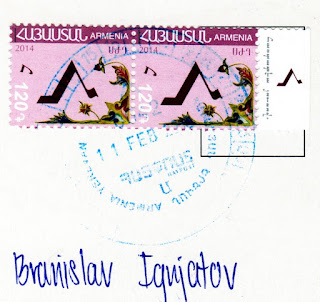 Stamps used for this postcards are from set Armenian alphabet, issued on 22.4.2014.

Posted by Branislav Ignjatov at 23:25