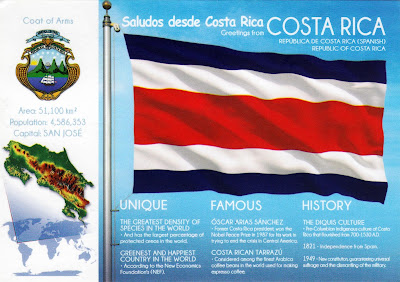 Costa Rica is a country in Central America, bordered by Nicaragua to the north, Panama to the southeast, the Pacific Ocean to the west, the Caribbean Sea to the east, and Ecuador to the south of Cocos Island. It has a population of around 4.9 million, in a land area of 51,060 square kilometers.

Costa Rica was sparsely inhabited by indigenous peoples before coming under Spanish rule in the 16th century. It remained a peripheral colony of the empire until independence as part of the short-lived First Mexican Empire, followed by membership in the United Provinces of Central America, from which it formally declared independence in 1847. Since then, Costa Rica has remained among the most stable, prosperous, and progressive nations in Latin America. Following the brief Costa Rican Civil War, it permanently abolished its army in 1949, becoming one of only a few sovereign nations without a standing army. 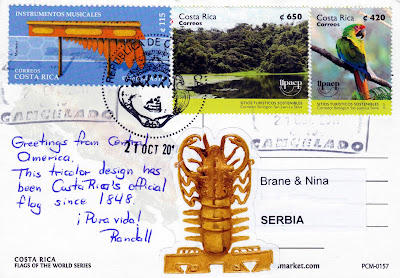 Beautiful stamps and cancellation from Costa Rica as always:
Musical Instruments from Guanacaste (from set of two), issued on 25.7.2007.
UPAEP - Tourism (whole set), issued on 27.9.2017.

Posted by Branislav Ignjatov at 23:32