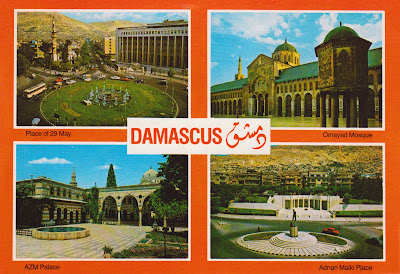 I have received my first postcard from war-torn Syria. Damascus is the capital city of Syria, and one of the oldest continuously inhabited cities in the world. First settled in the second millennium BC, it was chosen as the capital of the Umayyad Caliphate from 661 to 750. After the victory of the Abbasid dynasty, the seat of Islamic power was moved to Baghdad. Damascus saw a political decline throughout the Abbasid era, only to regain significant importance in the Ayyubid and Mamluk periods. Today, it is the seat of the central government and all of the government ministries.

Damascus was built in a strategic site on a plateau above sea level and about 80 km inland from the Mediterranean, sheltered by the Anti-Lebanon mountains, supplied with water by the Barada River, and at a crossroads between trade routes: the north-south route connecting Egypt with Asia Minor, and the east-west cross-desert route connecting Lebanon with the Euphrates river valley. The estimated population of Damascus in 2011 was 1,711,000. Damascus is the center of an over-crowded metropolitan area with an estimated population of 5 million.

Posted by Branislav Ignjatov at 23:12