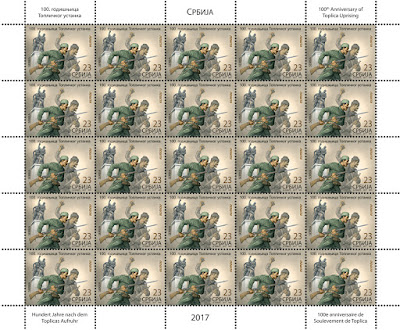 New Serbian stamp dedicated to 100th Anniversary of Toplica Uprising comes tomorrow! The Toplica Uprising was a Serb rebellion in 1917 carried out by Serbian guerrilla in the Toplica District against the Bulgarian occupation force in the eastern part of the Kingdom of Serbia, occupied since October 1915. The rebellion lasted from 21 February to 25 March 1917. The rebellion included the areas of Toplica, Jablanica, Jastrebac, eastern and central parts of Kopaonik. 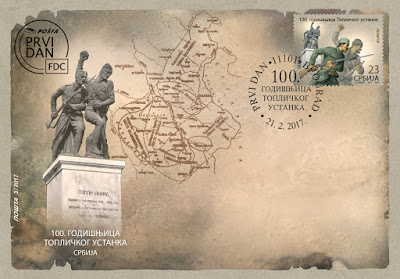 On March 12, the Bulgarian counter-attack started under the command of Alexander Protogerov involving IMRO forces led by Tane Nikolov. Bulgarian and Austro-Hungarian authorities worked together. IMRO commander and Bulgarian officer Todor Aleksandrov orchestrated the most violent actions committed by Bulgarian paramilitary. After several days of fighting, the Bulgarians entered Prokuplje on 14 March and the Austro-Hungarians entered Kuršumlija on 16 March. As of 25 March, the order there was fully restored. In the battles, several thousand people were killed, including civilians. In April 1917, Pećanac with his guerrillas, attacked a railway station. On May 15, Pećanac entered the old Bulgarian border and invaded Bosilegrad, which was burned. Then his band withdrew to Kosovo, controlled then by the Austro-Hungarians. The Allies opened a new front at Salonika in June but the Serbian Army was unable to break through the Bulgarian lines. After reemerging again for a short time, in September – October 1917 Pećanac again disappeared. In October 1917 the Austro-Hungarian command created entirely Albanian paramilitary detachments to capture the rest of the Serbian rebels into the mountains and in December 1917, Kosta Vojinović was killed.

The uprising is a notable event in the history of Serbia in World War I. It was the only rebellion in the territories occupied by the armies of the Central Powers.

Posted by Branislav Ignjatov at 12:54