Flags of the World Series: Switzerland 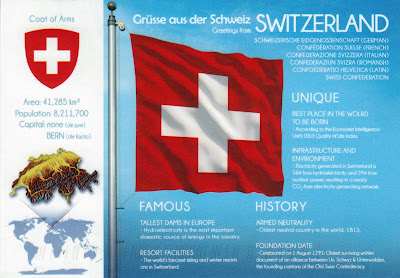 Another flag postcard from Flags of the World Series, this time from Switzerland! Switzerland is a federal republic in Europe. It consists of 26 cantons, and the city of Bern is the seat of the federal authorities. The country is situated in Western-Central Europe, and is bordered by Italy to the south, France to the west, Germany to the north, and Austria and Liechtenstein to the east. Switzerland is a landlocked country geographically divided between the Alps, the Swiss Plateau and the Jura, spanning an area of 41,285 km2.


Posted by Branislav Ignjatov at 20:12