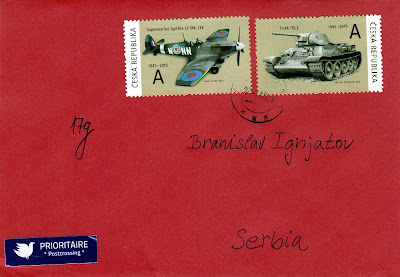 I received cover from Czech Republic with stamps from set They brought Freedom. Set of four stamps is issued on 20.01.2015. First stamp is Supermarine Spitfire LF Mk IXE aircraft. The Supermarine Spitfire was the the most important British fighter aircraft during World War II and is perhaps the most famous fighter ever. Altogether 20,351 of these aircraft were built.

Second stamp is T-34/76, a Soviet medium tank that had a profound and lasting effect on the field of tank design. At its introduction, the T-34 possessed an unprecedented combination of firepower, mobility, protection and ruggedness. Its 76.2 mm high-velocity tank gun provided a substantial increase in firepower over any of its contemporaries; its well-sloped armour was difficult to penetrate by most contemporary anti-tank weapons. When first encountered in 1941, German general Paul Ludwig Ewald von Kleist called it "the finest tank in the world" and Heinz Guderian affirmed the T-34's "vast superiority" over existing German armour of the period. Although its armour and armament were surpassed later in the war, it has often been credited as the most effective, efficient and influential tank design of the Second World War.

Inside cover was this Polish stamp for my Postcrossing collection. Poland issued this stamp on 14.07.2016.

Posted by Branislav Ignjatov at 12:37