The 30th Anniversary of the First Romanian Cosmonaut 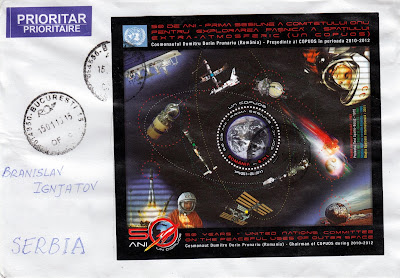 Romania celebrated The 30th Anniversary of the First Romanian Cosmonaut with this mini sheet issued on 09.05.2011. Dumitru-Dorin Prunariu was selected for spaceflight training in 1978 as a part of the Intercosmos Program. Having obtained the highest marks during three years of preparation, he was then selected for a joint space flight with the Russian cosmonaut Leonid Popov. In May 1981 they completed an eight-day space mission on board Soyuz 40 and the Salyut 6 space laboratory where they completed scientific experiments in the fields of astrophysics, space radiation, space technology, space medicine and biology. Prunariu is the 103rd human being to fly into space.

Posted by Branislav Ignjatov at 21:27