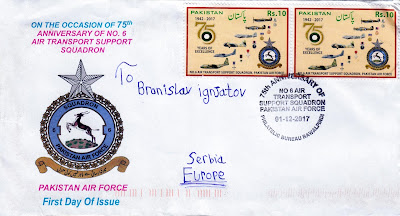 No 6 Squadron is one of the oldest squadrons of Pakistan Air Force, being one of the nine IAF squadrons raised before or during World War II. Of those pioneering nine, it is probably the one that has the most varied history and has assumed the widest range of roles. No 6 Squadron was raised at Trinchinopoly on 1st December, 1942 as a Tactical Reconnaissance squadron on Hurricanes. No 6 Squadron has the honor to participate in the World War II in which squadron was awarded with one
Distinguished Service Order (DSO), one Most Excellent Order of The British Empire (MBE) and two Distinguished Flying Cross (DFC) in recognition of its outstanding performance during the war. After partition, No 6 Squadron became the part of Royal Pakistan Air Force. Pakistan Post issued this FDC on 01.12.2017. 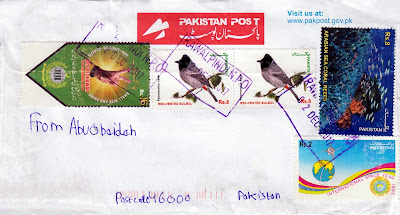 Posted by Branislav Ignjatov at 23:17