China: Romance of the Three Kingdoms

Romance of the Three Kingdoms is a 14th-century historical novel attributed to Luo Guanzhong. It is set in the turbulent years towards the end of the Han dynasty and the Three Kingdoms period in Chinese history, starting in 169 AD and ending with the reunification of the land in 280. The story – part historical, part legend, and part mythical – romanticises and dramatises the lives of feudal lords and their retainers, who tried to replace the dwindling Han dynasty or restore it. While the novel follows hundreds of characters, the focus is mainly on the three power blocs that emerged from the remnants of the Han dynasty, and would eventually form the three states of Cao Wei, Shu Han, and Eastern Wu. The novel deals with the plots, personal and military battles, intrigues, and struggles of these states to achieve dominance for almost 100 years. 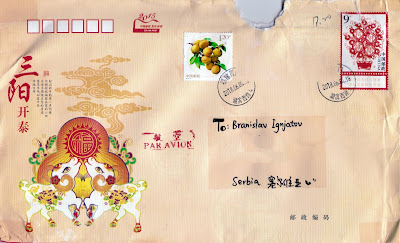 This cover looks like postman was hungry! Two stamps also missing. Survived stamp is Apricots, from set Fruits, issued on 23.7.2016.