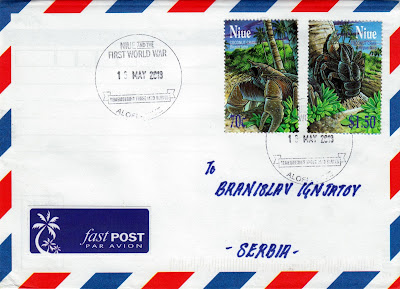 Niue is an island country in the South Pacific Ocean, 2,400 kilometers northeast of New Zealand, east of Tonga, south of Samoa, and west of the Cook Islands. Niue's land area is about 261 square kilometers and its population, predominantly Polynesian, was about 1,600 in 2016. Traditional name for Niue is "Rock of Polynesia". Niue is one of the world's largest coral islands. Niue, whose capital is the village of Alofi, is a self-governing state in free association with New Zealand; and New Zealand conducts most diplomatic relations on its behalf. Niueans are citizens of New Zealand, and Queen Elizabeth II is head of state in her capacity as Queen of New Zealand.


Thank you Wolfgang and Jinesh!

Posted by Branislav Ignjatov at 01:03