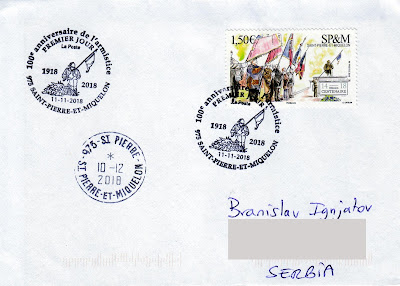 The Armistice of 11 November 1918 was the armistice that ended fighting on land, sea and air in World War I between the Allies and their opponent, Germany. Previous armistices had been agreed with Bulgaria, the Ottoman Empire and the Austro-Hungarian Empire. Also known as the Armistice of Compiègne from the place where it was signed at 5:45 a.m. by the French Marshal Foch, it came into force at 11:00 a.m. Paris time on 11 November 1918 and marked a victory for the Allies and a defeat for Germany, although not formally a surrender.

French Post issued this stamp for Saint Pierre and Miquelon on 11.11.2018, exactly 100 years later,  to mark this important historical event.

Posted by Branislav Ignjatov at 00:46