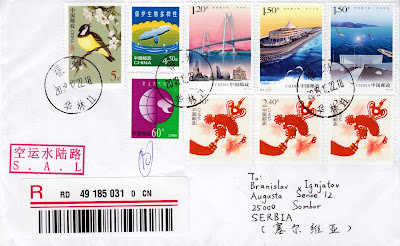 The Hong Kong–Zhuhai–Macau Bridge (HZMB) is a 55-kilometre bridge–tunnel system consisting of a series of three cable-stayed bridges, an undersea tunnel, and four artificial islands. It is both the longest sea crossing and the longest open-sea fixed link on earth. The HZMB spans the Lingding and Jiuzhou channels, connecting Hong Kong, Macau, and Zhuhai—three major cities on the Pearl River Delta. The HZMB was designed to last for 120 years. Posts from China, Hong Kong and Macau issued joint issue dedicated to HZMB,  on 30.10.2018.

Posted by Branislav Ignjatov at 18:47