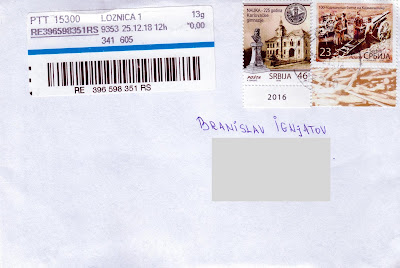 I received registered Serbian cover with stamps which celebrates two different and important anniversaries. First one is 225 years of Gymnasium of Karlovci, issued in 13.4.2016. The Gymnasium of Karlovci  is the high school located in the town of Sremski Karlovci. It is the oldest secondary school in Serbia.

Second stamp commemorates Centenary of the battle of Kaymakchalan, and is released on  12.9.2016. The Battle of Kaymakchalan was a battle that was fought between Serbian and Bulgarian troops on the Macedonian Front during World War I. The battle was fought between 12 and 30 September 1916, when the Serbian army managed to capture the peak of Prophet Ilia while pushing the Bulgarians towards the town of Mariovo, where the latter formed new defensive lines. Between 26 and 30 September, the peak changed hands several times until it was decisively captured by the Serbian army on the latter date.

Posted by Branislav Ignjatov at 17:48