Cover from Republic of Abkhazia 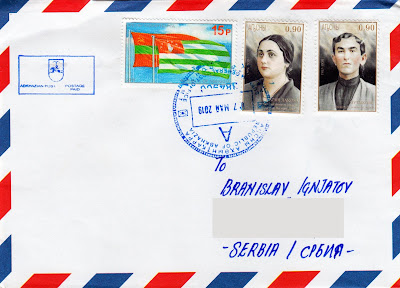 This is my first cover from Republic of Abkhazia, de facto and partially recognized republic on the eastern coast of the Black Sea, south of the Greater Caucasus mountains, in northwestern Georgia.
The status of Abkhazia is a central issue of the Georgian–Abkhazian conflict and Georgia–Russia relations. The polity is recognised as a state by Russia, Venezuela, Nicaragua, Nauru and Syria. While Georgia lacks control over Abkhazia, the Georgian government and most United Nations member states consider Abkhazia legally part of Georgia, whose constitution designates the area as the Autonomous Republic of Abkhazia.

Cover was sent from capital city Sukhumi, with stamps which are before considered as "Cinderellas", but now with real postal traffic they became real stamps! On this cover you can see stamps from two sets: First one is nice flag stamp Cooperation with Transnistria from 2018, and other two stamps shows famous people from Abkhazia, issued in 1998.

Posted by Branislav Ignjatov at 23:02