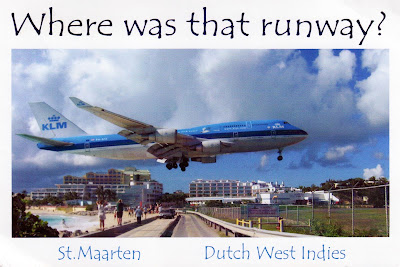 This is my first postcard from Sint Maarten, an island in the northeast Caribbean Sea, approximately 300 km  east of Puerto Rico. The 87-square-kilometre island is divided roughly 60/40 between the French Republic (53 km2) and the Kingdom of the Netherlands (34 km2), but the two parts are roughly equal in population. The division dates to 1648. The southern Dutch is one of four constituent countries that form the Kingdom of the Netherlands.

On this postcard you can see Princess Juliana International Airport, main airport on the Caribbean island of Saint Martin/Sint Maarten. This famous airport has very low-altitude flyover landing approaches, owing to one end of its runway being extremely close to the shore and Maho Beach, as you can see on this postcard. 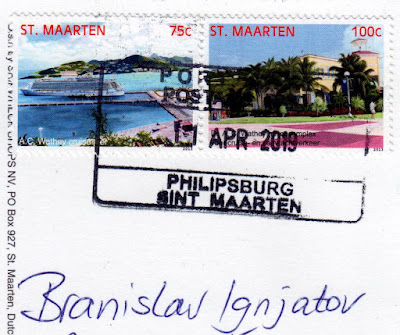 Both stamps on this postcard are from set Tourism - Local Views, issued on 3.4.2013.


I received earlier postcard from French part of the island and you can see it here.

Thank you very much Wolfgang for sending me postcards from both parts of the island!

Posted by Branislav Ignjatov at 00:57