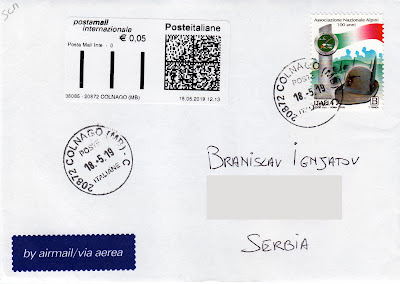 The National Alpini Association is an Italian association representing the "Alpini in congedo" (Alpini on leave) of the Italian Army. The Alpini are a mountain infantry corps of the Italian Army, that distinguished itself in combat during World War I and World War II. As the ANA defines itself a quick reaction reserve corps to the active Alpini units, it has been nicknamed 10th Alpini Regiment. Accordingly, the Italian Army never had a 10th Alpini Regiment. Italian post issued this commemorative stamp on 10.5.2019.

Posted by Branislav Ignjatov at 23:45