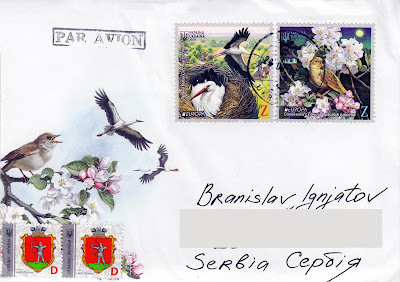 Ukrainian post issued two stamps for Europa CEPT 2019 National Birds, and many people claim these are the best Europa stamps for this year. I personally can't decide, i have many favorites. On this stamps you can see white stork (Ciconia ciconia) and thrush nightingale (Luscinia luscinia).

The white stork (Ciconia ciconia) is a large bird in the stork family Ciconiidae. Adults have long red legs and long pointed red beaks, and measure on average 100–115 cm from beak tip to end of tail, with a 155–215 cm wingspan. The white stork is a long-distance migrant, wintering in Africa from tropical Sub-Saharan Africa to as far south as South Africa, or on the Indian subcontinent. When migrating between Europe and Africa, it avoids crossing the Mediterranean Sea and detours via the Levant in the east or the Strait of Gibraltar in the west, because the air thermals on which it depends for soaring do not form over water.

The thrush is a migratory insectivorous species breeding in forests in Europe and Asia and overwintering in Africa. The distribution is more northerly than the very closely related common nightingale, Luscinia megarhynchos, which it closely resembles in appearance. It nests near the ground in dense undergrowth.


Posted by Branislav Ignjatov at 02:46