Lizards on cover from Dominica 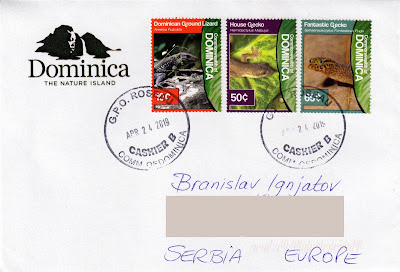 Dominica is an island country in the West Indies. The capital, Roseau, is located on the western side of the island. It is part of the Windward Islands in the Lesser Antilles archipelago in the Caribbean Sea. The island is located near Guadeloupe to the northwest and Martinique to the south-southeast. The island was originally inhabited by the Kalinago and later colonised by Europeans, predominantly by the French from the 1690s to 1763. Columbus is said to have passed the island on Sunday 3 November 1493, and the island's name is derived from the Latin for "Sunday". Great Britain took possession in 1763 after the Seven Years' War, and it gradually established English as its official language. The island republic gained independence in 1978.

Posted by Branislav Ignjatov at 00:47