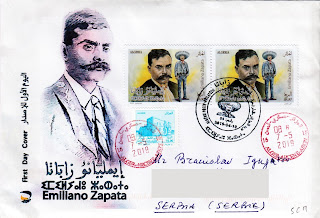 Born on August 8, 1879, Anenecuilco, Mexico, Emiliano Zapata was a Mexican revolutionary and advocate of agrarianism who fought in guerrilla actions during the Mexican Revolution. He formed and commanded the Liberation Army of the South, an important revolutionary brigade, and his followers were known as Zapatistas. Zapata he was killed in an ambush on April 10th, 1919. Algerian post commemorated 100th anniversary of his death with this nice stamp and postmark on 10.4.2019.

Posted by Branislav Ignjatov at 16:40