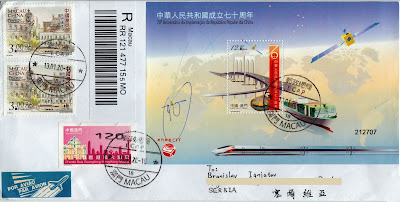 Macao Post released set of stamps and souvenir sheet dedicated to 70th Anniversary of the People's Republic of China. The Communist Party of China had defeated the Kuomintang Party following the Chinese Civil War, which occurred intermittently between 1927 and 1950 In the aftermath of the civil war, the Kuomintang and its loyalists then retreated to the island of Taiwan, formerly a prefecture of the Qing Empire, which had been under Japanese colonial rule from 1895 to 1945. The founding of the People's Republic of China was formally proclaimed by Mao Zedong, the Chairman of the Communist Party of China, on 1 October 1949 at 3:00 pm in Tiananmen Square in Beijing.

Posted by Branislav Ignjatov at 02:18