Malayan Tiger on cover from Malaysia 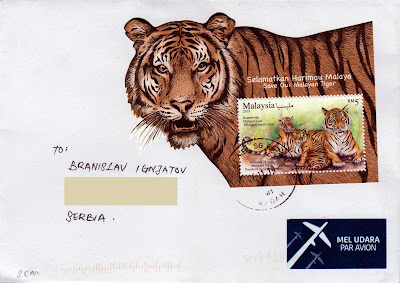 The Malayan tiger is a Panthera tigris tigris population in Peninsular Malaysia. This population inhabits the southern and central parts of the Malay Peninsula, and has been classified as Critically Endangered on the IUCN Red List in 2015. The population was roughly estimated at 250 to 340 adult individuals in 2013, and likely comprises less than 200 mature breeding individuals and has a declining trend. This souvenir sheet is part of set Protected Fauna of Malaysia, issued on 28.7.2019. There's 3 more stamps in this set, and i received them earlier on this cover.

Posted by Branislav Ignjatov at 03:36