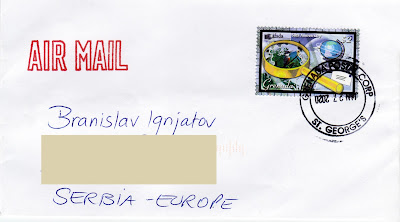 I received my first cover from Grenada, small island state in the southeastern Caribbean Sea. It is located northwest of Trinidad and Tobago, northeast of Venezuela and southwest of Saint Vincent and the Grenadines. Before the arrival of Europeans in the Americas, Grenada was inhabited by the indigenous Arawaks and later by the Island Caribs. Christopher Columbus sighted Grenada in 1498 during his third voyage to the Americas. Although it was deemed the property of the King of Spain, there are no records to suggest the Spanish ever landed or settled on the island. French settlement and colonization began in 1650 and continued for the next century. On 10 February 1763, Grenada was ceded to the British under the Treaty of Paris. From 1958 to 1962 Grenada was part of the Federation of the West Indies, a short-lived federation of British West Indian colonies. On 3 March 1967, Grenada was granted full autonomy. Stamp on this cover is dedicated to The 50th Anniversary of International Federation of Stamp Dealers' Associations, and is issued on 16.12.2002.

Posted by Branislav Ignjatov at 20:57