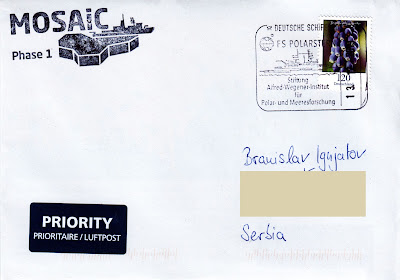 RV Polarstern (Polar Star) is a German research icebreaker of the Alfred Wegener Institute for Polar and Marine Research (AWI) in Bremerhaven. Polarstern was commissioned in 1982 and is mainly used for research in the Arctic and Antarctica. On September 20, 2019, she sailed from Tromsø, Norway, for a 12 to 14 month-long Multidisciplinary drifting Observatory for the Study of Arctic Climate (MOSAiC) expedition across the Arctic. She settled in an ice floe on October 4, 2019 and will drift in it past the North pole eventually reaching open water in the Fram Strait. This fantastic cover was sent on 13.12.2019. and i received this cover two months later. 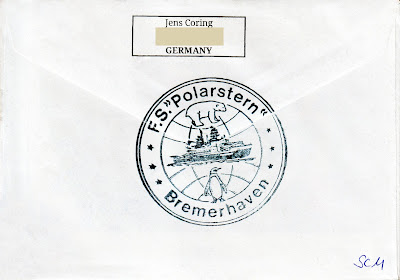 For the first time a modern research icebreaker will operate in the direct vicinity of the North Pole year round, including the nearly half year long polar night during winter. In terms of the logistical challenges involved, the total number of participants, the number of participating countries, and the available budget, MOSAiC represents the largest Arctic expedition in history. During its one-year-long journey, the central expedition ship, the research icebreaker Polarstern from Germany's Alfred Wegener Institute, Helmholtz Centre for Polar and Marine Research (AWI), will be supported and resupplied by the icebreakers Akademik Fedorov and Kapitan Dranitsyn (Russia), Oden (Sweden) and Xue Long II (China). In addition, extensive operations involving helicopters and other aircraft are planned.


Thank you so much, Jens, for this fantastic cover!

Posted by Branislav Ignjatov at 22:22