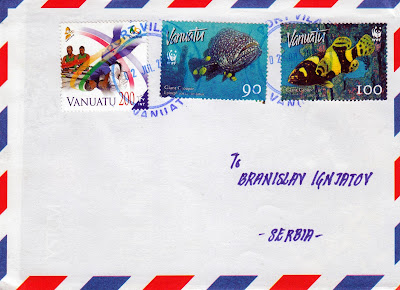 I received my first cover from Vanuatu, a Pacific island country located in the South Pacific Ocean. The archipelago, which is of volcanic origin, is 1,750 kilometres east of northern Australia, 540 kilometres northeast of New Caledonia, east of New Guinea, southeast of the Solomon Islands, and west of Fiji. The prehistory of Vanuatu is obscure; archaeological evidence supports the theory that people speaking Austronesian languages first came to the islands about 3,300 years ago. Pottery fragments have been found dating to 1300–1100 BC. In the 1880s, France and the United Kingdom claimed parts of the archipelago, and in 1906, they agreed on a framework for jointly managing the archipelago as the New Hebrides through an Anglo–French condominium. An independence movement arose in the 1970s, and the Republic of Vanuatu was founded in 1980.

Posted by Branislav Ignjatov at 14:55