Dinosaur on registered cover from China 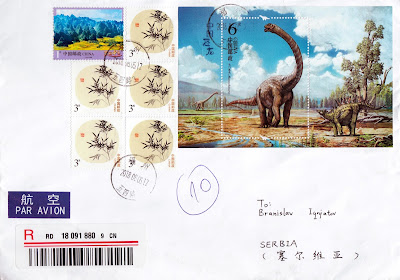 This mini sheet is part of set Chinese Dinosaurs. I received bigger sheet from this set before, and you can see it here. So, I finally got smaller sheet, with one, but big and very nice stamp featuring Mamenchisaurus. Mamenchisaurus is a sauropod dinosaur genus including several species, known for their remarkably long necks which made up half the total body length. It is known from numerous species which ranged in time from 160 to 145 million years ago, from the Oxfordian to Tithonian ages of the late Jurassic Period of China, and the largest species may have reached 35 m in length and possibly weighed 50 to 75 tons. This set is issued on 19.5.2017.

Posted by Branislav Ignjatov at 20:27