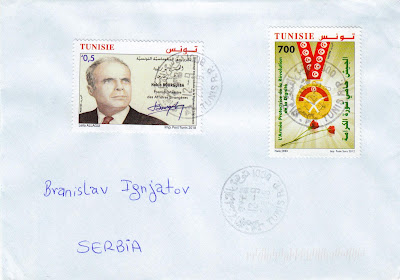 I received cover from Tunisia with new stamp dedicated to Habib Bourguiba, Tunisian lawyer, nationalist leader and statesman who served as the country's leader from independence in 1956 to 1987. He first served as the second Prime Minister of the Kingdom of Tunisia before proclaiming the Tunisian Republic in 1957 and thus becoming the first President of Tunisia. Prior to that, he played a major role in obtaining independence from France, ending the 75 years old protectorate and earning the title of "Supreme Combatant". Stamp is issued on 31.7.2018. Second stamp is dedicated to The 56th Anniversary of the National Army, and is issued on 24.6.2012. 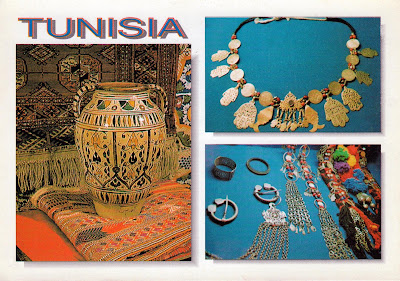 Inside cover was this beautiful postcard with local arts and crafts.

Posted by Branislav Ignjatov at 23:41