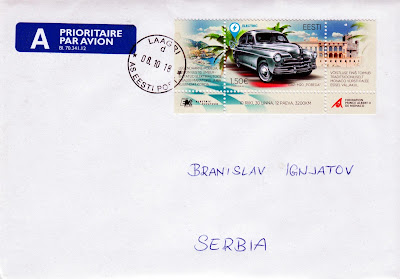 Tallinn was one of the starting points for the Monte Carlo rally in 1930–1939; as of 2011, the legendary competition is driven by electric cars. 2018 marks the first time that the electric car marathon follows the route from the Tallinn–Monte Carlo rally, which was held in the 1930s and was driven along the Baltic's Sea coast and through France. Minisheet with 2 stamps is issued on 18.9.2018. On this stamp you can see GAZ-M20 Pobeda, a passenger car produced in the Soviet Union by GAZ from 1946 until 1958. It was also licensed to Polish Passenger Automobile Factory, as FSO Warszawa. Although usually known as the GAZ-M20, an original car's designation at that time was just M-20, for "Molotovets" (GAZ factory bore a name of Vyacheslav Molotov).

Posted by Branislav Ignjatov at 14:28