Star Trek: The Trouble with Tribbles, with cancellation from Moonbeam, Ontario 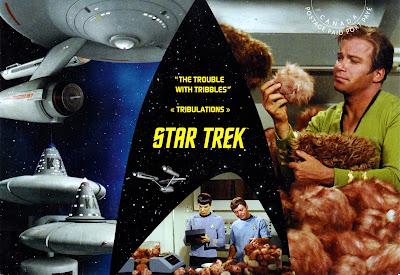 "The Trouble with Tribbles" is the fifteenth episode of the second season of the American science fiction television series Star Trek. In the episode, the starship Enterprise arrives at Deep Space Station K7 to guard a consignment of grain bound for Sherman's Planet. On arrival, a trader named Cyrano Jones gives Lt. Uhura a tribble, a small, furry alien lifeform, with dramatic consequences.


This is trailer for this famous comedic episode 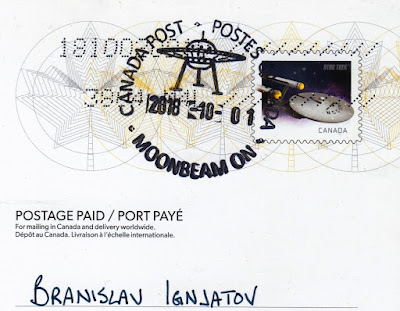 This postcard is sent with awesome cancellation from Moonbeam, Ontario. The name "Moonbeam" is attributed to early pioneers who allegedly witnessed flashing lights falling from the sky, which they called "moonbeams". These lights fell down or reflected in a creek that flows west from Strickland to Rémi Lake and was called Moonbeam Creek. These lights could have been Northern Lights that often appear with the moon light.

Another suggestion is that the name came from the passengers on the Transcontinental Railway, who would be traveling for many miles through dark forests and when they came to the natural clearing near Moonbeam would be struck by the brilliance of the moon-lit snow. Nevertheless, there is no documented proof of the exact source of this name.

Posted by Branislav Ignjatov at 22:17