Jass cards on cover from Switzerland 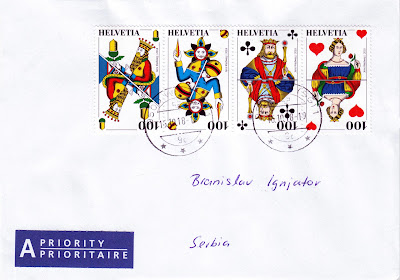 Jass, first mentioned in Switzerland in 1796, was originally the name of the highest trump, the Jack, in a family of related games originally spread from the Netherlands during the Late Middle Ages. Today, Jass is the name of the game. The traditional 36-card, Swiss-German-suited pack with which it is played is called Jasskarten. By extension, Jass is often used of any game played in Switzerland with such cards. The Jack of the trump suit is not known as Jass in the contemporary game. Cards are not often represented on stamps, so it was pleasure to see this set issued on 6.9.2018.

Posted by Branislav Ignjatov at 01:03