Afghanistan: Postcard sent from Bagram base, missent to Rammstein base 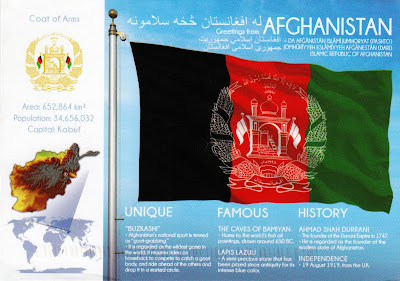 This is my first postcard from the Islamic Republic of Afghanistan, war-torn country in Asia. As a result of most recent war, there's a several American and NATO bases, and most famous is Bagram Air Base, largest U.S. military base in Afghanistan. It is located next to the ancient city of Bagram, 11 kilometres southeast of Charikar in the Parwan Province of Afghanistan. It has a dual runway capable of handling any size military aircraft, including Lockheed Martin C-5 Galaxy and Antonov An-225. Bagram Air Base is occupied by the Afghan Armed Forces and the US-led Resolute Support Mission. 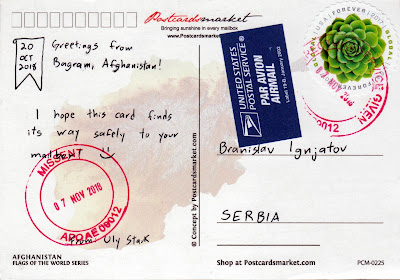 Postcard is sent from Bagram Air Base, but unfortunately it's not cancelled there. But there's nice "missent" cancellation from APO AE 09012, and that's Rammstein Air Base in Germany.