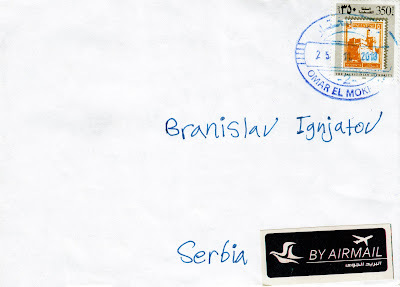 I received cover from Palestine, from Gaza City. On postmark you can see inscription Omar el Mokhtar, that's a main street in Gaza City, running from Palestine Square to the Port of Gaza in the Rimal district, separating the Old City's al-Daraj and Zaytoun quarters. Gaza's hotel strip is a part of Omar Mukhtar Street and most of Gaza's most important buildings are located along the street. Built during World War I by Ottoman governor Jamal Pasha, the street was originally named after him. However, following the ouster of Ottoman forces from Palestine in 1917, Gaza's city council headed by Fahmi al-Husseini named the street after Omar Mukhtar, a Libyan revolutionary leader.
Stamp on cover is from set Postage Stamps of the British Mandate in Palestine, issued on 17.5.1995.

Posted by Branislav Ignjatov at 00:59