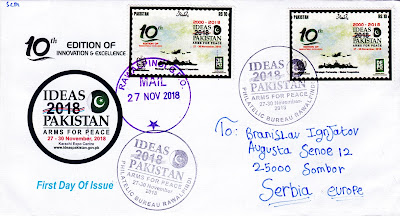 The International Defence Exhibition and Seminar, more commonly referred to as IDEAS, is a defence sector event, held biannually, in Pakistan. The Pakistan government attaches a high level of importance to IDEAS; despite the fact that it attracts a large number of delegates, it is seen as a vehicle for facilitating their own indigenous arms trade. Pakistani post commemorated IDEAS 2018 with this First day cover issued on 27.11.2018. 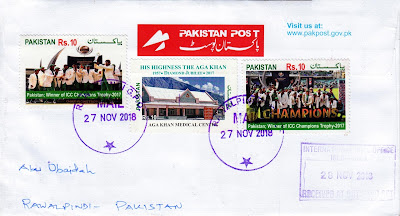 Sender added additional postage on the back of the cover:
First and third stamps are from set Pakistan Victory in 2017 International Cricket Cup, issued on 2.11.2017. Second stamp is from set The 60th Anniversary of His Highness The Aga Khan, issued on 8.12.2017.

Posted by Branislav Ignjatov at 23:40