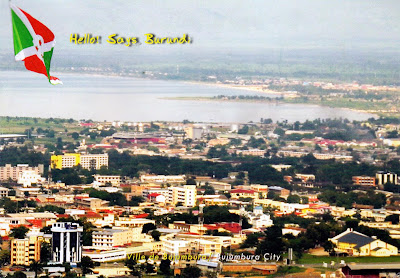 Bujumbura is the former capital, largest city and main port of Burundi. But this postcard is sent in November 2018, while Bujumbura was still capital city. Gitega is new capital city from 24.12.2018. It is on the north-eastern shore of Lake Tanganyika, the second deepest lake in the world after Lake Baikal. The city center is a colonial town with a large market, the national stadium, a large mosque, and the cathedral for the Archdiocese of Bujumbura. Museums in the city include the Burundi Museum of Life and the Burundi Geological Museum. Other nearby attractions include the Rusizi National Park, the Livingstone-Stanley Monument at Mugere (where David Livingstone and Henry Morton Stanley visited 14 days after their first historic meeting at Ujiji in Tanzania), the presidential palace and the source of the southernmost tributary of the Nile, described locally as the source of the Nile. 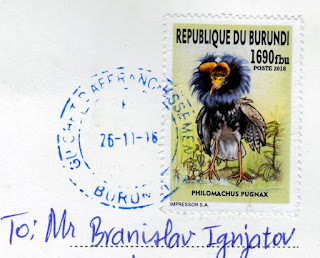 Fantastic 2018 stamp with ruff (Calidris pugnax), but i didn't find and further  info about this stamp.

Thank you Wolfgang and Nibizi!


Posted by Branislav Ignjatov at 20:58