Fauna on cover from Republic of Artsakh 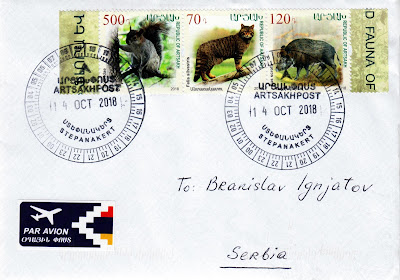 First animal is squirrel, member of the family Sciuridae, a family that includes small or medium-size rodents. The squirrel family includes tree squirrels, ground squirrels, chipmunks, marmots , flying squirrels, and prairie dogs amongst other rodents. The earliest known squirrels date from the Eocene period and are most closely related to the mountain beaver and to the dormouse among other living rodent families.

Second animal is Felis silvestris, European wildcat native to continental Europe, Scotland, Turkey and the Caucasus. It inhabits forests from the Iberian Peninsula, Italy, Central and Eastern Europe to the Caucasus. It has been extirpated in England and Wales.

Third animal is  wild boar (Sus scrofa), native to much of Eurasia, North Africa, and the Greater Sunda Islands. Human intervention has spread its distribution further, making the species one of the widest-ranging mammals in the world, as well as the most widely spread suiform.The animal probably originated in Southeast Asia during the Early Pleistocene, and outcompeted other suid species as it spread throughout the Old World.

Posted by Branislav Ignjatov at 23:56