Ukraine: Reply of the Zaporozhian Cossacks 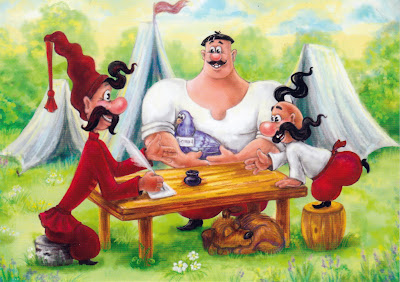 Reply of the Zaporozhian Cossacks depicts a supposedly historical tableau, set in 1676, and based on the legend of Cossacks sending a reply to an ultimatum of the Sultan of the Ottoman Empire, Mehmed IV. The original reply has not survived; however, in the 1870s an amateur ethnographer from Yekaterinoslav, Novitsky, found a copy made in the 18th century.

The Cossacks of the Zaporozhian Cossacks, inhabiting the lands around the lower Dnieper River in Ukraine, had defeated Ottoman Empire forces in battle. However, Mehmed demanded that the Cossacks submit to Turkish rule. The Cossacks, led by Ivan Sirko, replied in an uncharacteristic manner: they wrote a letter, replete with insults and profanities.

This awesome stamp is Postcrossing, issued on 2015-10-09. There is also first day of issue postmark.


Thank You very much Lisa!


Posted by Branislav Ignjatov at 00:05