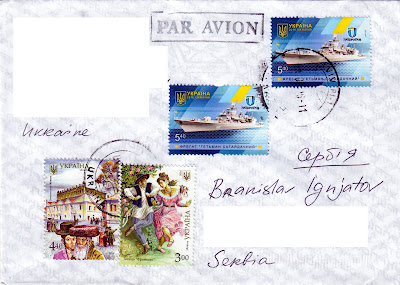 Other two stamps are from set National Minorities in Ukraine - Jews, issued on 27.08.2016.Jewish communities have existed in the territory of Ukraine from the time of Kievan Rus' (one of Kiev city gates was called Judaic) and developed many of the most distinctive modern Jewish theological and cultural traditions such as Hasidism. According to the World Jewish Congress, the Jewish community in Ukraine constitute the third biggest Jewish community in Europe and the fifth biggest in the world. Over a million Jews are killed in various occasions in Ukraine, but most of them during World War Two.

Posted by Branislav Ignjatov at 19:07