New Serbian stamp: 100th anniversary of the Battle of Kaymakchalan 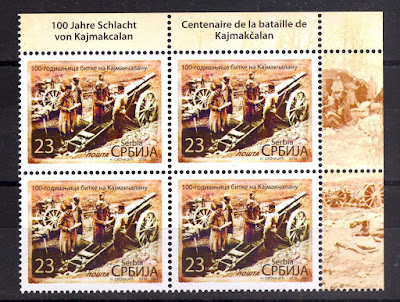 Here is an new Serbian stamp, dedicated to famous Battle of Kaymakchalan in World War I. The Battle of Kaymakchalan was a battle that was fought between Serbian and Bulgarian troops on the Macedonian Front during World War I. The battle was fought between 12 and 30 September 1916, when the Serbian army managed to capture the peak of Prophet Ilia while pushing the Bulgarians towards the town of Mariovo, where the latter formed new defensive lines. Between 26 and 30 September, the peak changed hands several times until it was decisively captured by the Serbian army on the latter date. 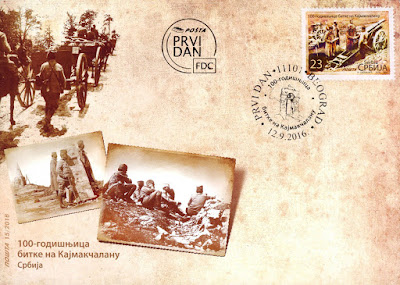 The battle proved to be very costly for both sides. Serbian losses had reached around 10,000 killed and wounded by 23 September. The Bulgarian companies had been reduced to 90 men each and one regiment, the 11th Sliven Regiment, had 73 officers and 3,000 men hors de combat.

By strategic aspect, the battle was not a huge success for the Allies due to the upcoming winter that rendered further military engagements almost impossible.

Today, there is a small church on the peak of Prophet Ilia where the skulls of dead Serbian soldiers are stored. Release date for stamps and FDC is 12.09.2016.

Posted by Branislav Ignjatov at 12:39