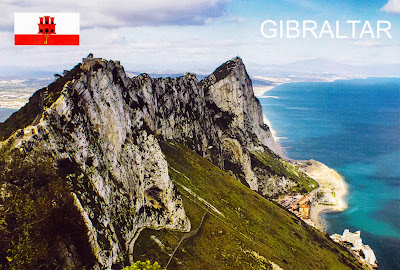 I have received my first postcard from beautiful Gibraltar! The Rock of Gibraltar is a monolithic limestone promontory located in the British overseas territory of Gibraltar, off the southwestern tip of Europe on the Iberian Peninsula. The Rock is Crown property of the United Kingdom, and borders Spain. Most of the Rock's upper area is covered by a nature reserve, which is home to around 300 Barbary macaques. These macaques, as well as a labyrinthine network of tunnels, attract a large number of tourists each year.

The Rock of Gibraltar was one of the Pillars of Hercules and was known to the Romans as Mons Calpe, the other pillar being Mons Abyla or Jebel Musa on the African side of the Strait. In ancient times, the two points marked the limit to the known world, a myth originally fostered by the Greeks and the Phoenicians.

This beautiful stamps are from set The 500th Anniversary of the Admission to the Throne of Henry VIII, issued on 10.01.2009. On first you can see Anne Boleyn, on second Catherine of Aragon, and on third you can see ship Mary Rose, carrack-type warship of the English Tudor navy of King Henry VIII.


Posted by Branislav Ignjatov at 21:39