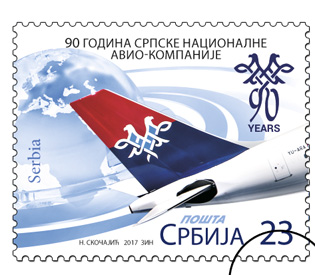 After long summer break, this will be first new Serbian stamp - 90th anniversary of the Serbian national airline.
90 years ago, in the Palace of the Adriatic-Danube Bank in Belgrade, Aeroput was founded as the country’s first joint-stock company for civil aviation.At the time it was established, it was the 10th such company in Europe and the 21st in the world. That company founded in 1927, which was originally known as Aeroput and then, from 1947, as JAT, is the eighth oldest airline in the world that still exists.

After 56 years of operation, the company was renamed Jat Airways in December 2003, using this event to promote a new visual identity. Jat Airways was one of the first airlines to obtain a security certificate in 2005. In 2013, Air Serbia was born. On 1st August 2013 the Government of the Republic of Serbia and Etihad Airways concluded an agreement that saw this Abu Dhabi-based airline acquire a 49-per cent stake in Serbia’s national airline. 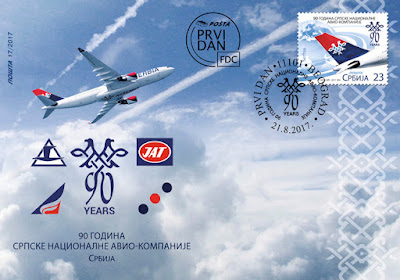 The Serbian airline welcomes the 90th anniversary of Serbian aviation as the proud winner of the 2017 Aviation Market Leader prize, which is awarded by Air Transport World (ATW), the world’s leading media monitoring developments in airlines worldwide.

Posted by Branislav Ignjatov at 16:35