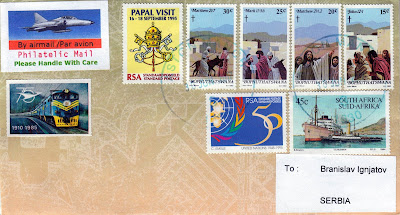 The Republic of Bophuthatswana, was a Bantustan (an area set aside for members of a specific ethnicity) and nominal parliamentary democracy in the northwestern region of South Africa. Bophuthatswana was the first area to be declared an independent state whose territory constituted a scattered patchwork of individual enclaves. In 1994, it was reintegrated into South Africa, and its territory was distributed among the new provinces of the Orange Free State (now Free State), Northern Cape, and North West Province.

I also received a few mint Bophuthatswana stamps inside cover:


Thank you very much Willy!


Posted by Branislav Ignjatov at 21:57