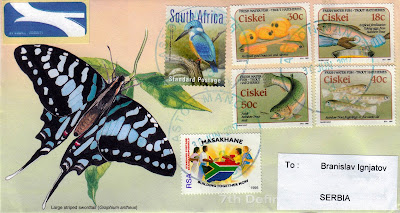 Ciskei was a nominally independent state – a Bantustan – in the south east of South Africa. It covered an area of 7,700 square kilometers, almost entirely surrounded by what was then the Cape Province, and possessed a small coastline along the shore of the Indian Ocean. Under South Africa's policy of apartheid, land was set aside for black peoples in self-governing territories. Ciskei was designated as one of two homelands or "Bantustans" for Xhosa-speaking people.

I received this mixed Ciskei cover from South Africa. You can't use Ciskei stamps for international mail, but they can be used together with South African stamps. 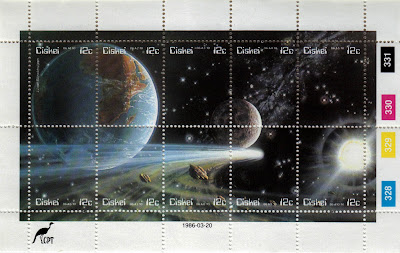 I also received one beautiful mini-sheet inside cover: Halley's Comet, issued on 20.03.1986.

Thank you very much Willy!

Posted by Branislav Ignjatov at 01:43