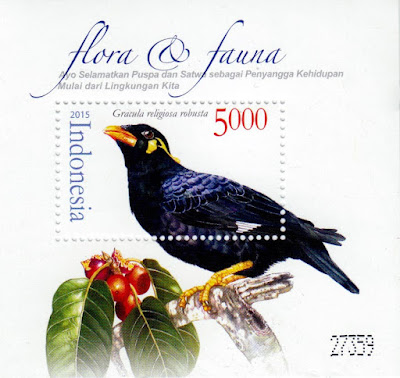 This beautiful bird on this minisheet is common hill myna (Gracula religiosa), sometimes spelled "mynah" and formerly simply known as hill myna, is the myna most commonly seen in aviculture, where it is often simply referred to by the latter two names. It is a member of the starling family (Sturnidae), resident in hill regions of South Asia and Southeast Asia. Indonesian Post released this issue on 5.11.2015. 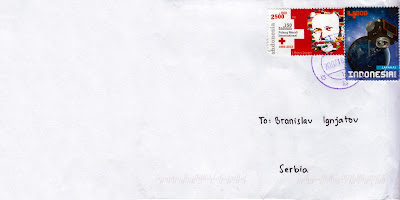 I received minisheet in this cover, with two stamps used for postage:
Henry Dunant (from set 150th anniversary of the Red Cross), issued on 8.5.2013.
And second one is from set Satellites, issued on 27.9.2016.


Thank you my friend!

Posted by Branislav Ignjatov at 01:09